Daniela is an assistant professor of journalism at California State University, Northridge with a focus on community, ethnic and participatory media and the founding editor of the immigration newsletter Migratory Notes.

Previously, Daniela worked with the Los Angeles Times as a community engagement editor and directed the Civic Engagement and Journalism Initiative at University of Southern California’s Annenberg School for Communication and Journalism. As part of that role, she was the editor of Alhambra Source, a multilingual community site. It is also a research initiative into how local news can foster civic engagement and cross linguistic and ethnic barriers.

Daniela has reported for the Financial Times Magazine, The New York Times, PRI’s The World, Weekend America, Der Spiegel, WNYC: New York Public Radio, among other outlets. Her first newspaper job was as an immigration reporter for the New York Sun, where her beat included Chinese-Italian tensions in Brooklyn, Irish undocumented immigrants in the Bronx, the national immigration debate in Washington and Dominican deportees in Santo Domingo.

She spent more than a year reporting from Berlin on guest worker programs as an Alexander von Humboldt Foundation German Chancellor Scholar and Arthur F. Burns Fellow. She also investigated her own family’s refugee experience in an award-winning German-language radio documentary, Too Many Geister.

Daniela graduated from Brown University with a BA in International Relations and History, and USC Annenberg with an MA in Specialized Journalism, focusing on demographics, immigration and digital media. She speaks Portuguese and Spanish, and is conversant in German and Hebrew.

Karen Pennar has a long career as a journalist and has also worked in health care and written plays.

Karen’s first reporting job was at the Journal of Commerce, where she wrote about foreign currencies. She subsequently worked for nearly two decades at BusinessWeek Magazine, where as Economics Editor and Senior Writer she covered a wide range of domestic and international topics, including globalization, Federal Reserve policy, international trade, human capital, and the privatization of Russian enterprises. She was the lead writer on numerous BusinessWeek cover stories and served as Assistant Managing Editor for BusinessWeek’s 1999 special issue, 100 Years of Innovation.

A born and bred New Yorker, Karen grew up in the Washington Heights neighborhood of Manhattan in a multi-cultural household – her mother was Egyptian and her father was Estonian. Karen received a BA in economics from Barnard College and a Masters in Public Health from Yale University. She speaks conversational French and Russian. 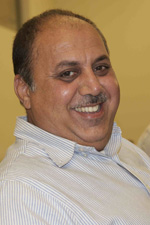 Jehangir began his journalism career in 1986 in Pakistan working for a variety of English daily newspapers before becoming news editor of The Frontier Post. During the 1990s, he covered the Soviet invasion of Afghanistan, the subsequent civil war, the rise of the Taliban and upheavals in Pakistan. He was president of the largest press club in northwestern Pakistan, and worked for international organizations like Reporters Sans Frontiers. Jehangir’s association with New York’s ethnic and community media started in the late 1990s when he worked for different Pakistani community Urdu and English language publications. He regularly is a commentator on Pakistani, American and British radio and TV.

Jennifer Cheng is the associate editor at Voices of NY and assists in the planning and technical side for events and projects at the Center for Community and Ethnic Media. She has been working with the ethnic and community press since 2009 when she joined the New York Community Media Alliance, which housed Voices That Must Be Heard, the predecessor to Voices of NY. Along with working on Voices there, she helped put together the report, “Ethnic and Community Press Fellowship – Developing an Education Beat” and was involved in organizing the Ippies Journalism Awards. Jennifer has a B.S. from New York University. She has some experience in web coding and is conversational in Mandarin Chinese.