By: Jehangir Khattak
In: Industry News & Reports
With: 0 Comments 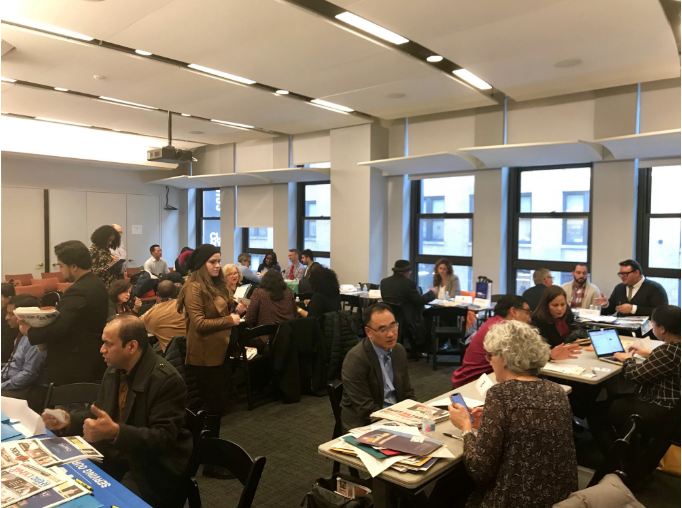 It was Valentine’s Day, but this was not your typical speed-dating event.

Journalists and publishers from outlets that are too often invisible to those in power — among them Weekly Bangalee, Haitian Times, Indian Panorama, Allewa Alarabi, Queens Latino, and dozens more — entered the room. Waiting for them at tables were marketing and press reps for the New York City departments of health, education, human rights, children’s services, buildings and seven other city agencies. Then, in what became more musical chairs than traditional speed dating, the journalists and publishers migrated from one table to another, exchanging information with the city reps for about four minutes until a bell rang and they moved to the next available spot.

At the Center for Community and Ethnic Media at the Craig Newmark Graduate School of Journalism we host dozens of trainings and press conferences for local community and ethnic media every year. Last spring, after three city reps spoke on one of our panels, they were mobbed by publishers eager to share a few words with them and pitch their publications. That’s when New York co-director Karen Pennar realized we needed to create a matchmaking effort of sorts to connect community and ethnic outlets and their government agencies.

A few months later we announced a “speed-dating” event at which people could have meaningful one-on-one time with representatives from the city. The response was overwhelming: 45 outlets signed up.

We know that sustainability and access are critical issues facing the more than 200 community and ethnic media outlets in New York City, just as they are across the country. These outlets, many with newsrooms of five people or fewer, have been hit hard with the same fiscal challenges of local media nationally, but also with additional obstacles due to their often small scale, under-resourced communities, and globalization of news. At the same time, as smaller outlets, they often lack connections to city agencies.

By giving people a chance to network, we watched connections being forged –between the media outlets whose work is in the city’s myriad communities that speak more than 200 languages, and the government entities whose activities and messaging needs to reach deep into those communities. And we’re optimistic that lasting relationships will be formed. (We will check back in to see more about that later.)