The State of Nonprofit News: Benchmarking the Future 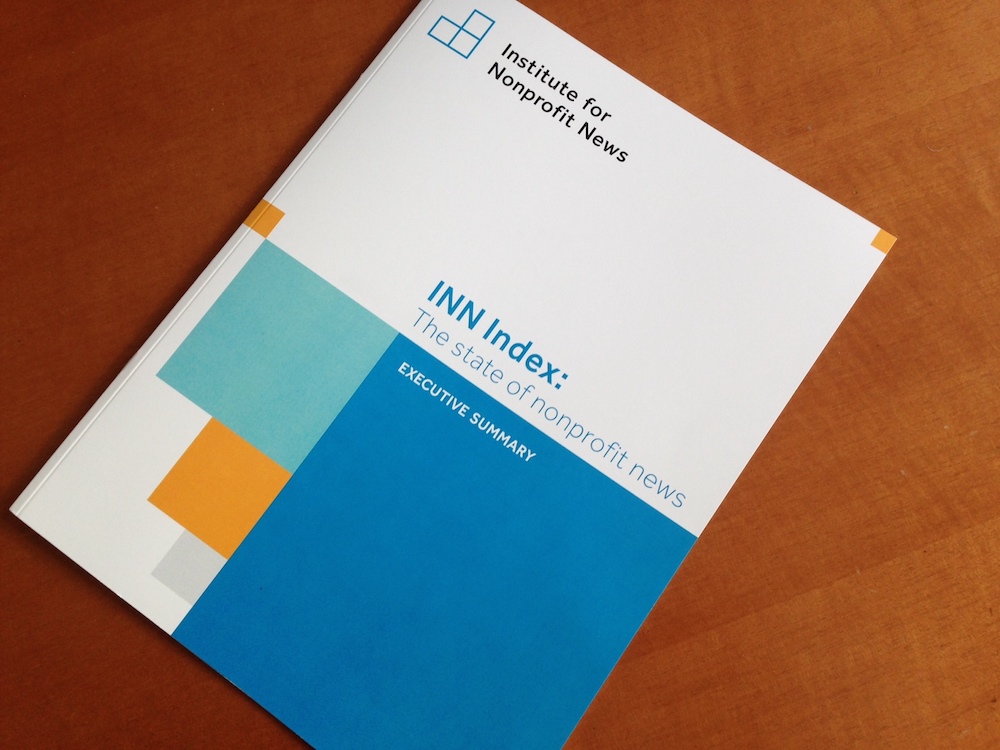 Nonprofit journalism, represented by a growing number of outlets and reach in recent years, is “securing its place and helping create a new ecosystem for news while serving a critical role in American civic life.”

So concludes the Institute for Nonprofit News in its report “INN Index: The state of nonprofit news,” released Oct. 2 at the Craig Newmark Graduate School of Journalism in New York.

The study was based on a survey which 149 of INN’s more than 180 members were invited to complete. Responses were received from 88 participants, yielding about 200 data points on each media outlet’s mission, revenue, budgeting, engagement and distribution practices during fiscal year 2017. The study is the most comprehensive such look to date, and offers nonprofits a baseline from which to benchmark future performance.

Among the outlets responding, 39 percent said that their primary mission was investigative journalism, while another 23 percent stated that their focus was on explanatory journalism and analysis. A distinct minority, 19 percent, said they offered news and events, while another 19 percent reported a mix of coverage. Many are “filling a gap,” said Michelle McLellan, an independent media expert who designed the study. Single-topic coverage is the fastest-growing segment of nonprofits news, she noted, with a third of the outlets covering subjects such as health, education, environment or justice. There was a big jump in the creation of nonprofit news outlets in 2009-2010, according to the study.

“We saw really good news around revenue,” McLellan said. The report notes that 20 percent of the outlets generated total revenue in 2017 of $2 million or more, and 17 percent generated revenue of $1 million to $2 million. The entire membership of INN is now generating an estimated $325 million to $350 million in annual revenue.

While nonprofit media outlets did report some diversification in their sources of revenue, there is still a danger of “dependence” on single sources such as foundations and large donors, McLellan noted. Jesse Holcomb, a media researcher and data analyst who also discussed findings of the report, noted that a review of operating expenses at these nonprofit news outlets showed that only 10 percent of expenses were being allocated toward revenue generation, a share he deemed too low. Sue Cross, executive director of INN, said that most new outlets are underfunded when they launch, and she urges managers to allocate as much as 50 percent of expenses toward revenue generation at the outset. “Unless they are building community,” said Cross, “they’ll always be behind the eight ball.”

Speaking from the audience, Richard Tofel, president of ProPublica, one of the oldest, largest and most successful of the nonprofit outlets, pushed back against the idea that managers of these journalism sites should fritter energy on developing other revenue streams that will ultimately account for only a tiny portion of overall revenues. Better, he said, to “focus your energy on philanthropy of all sorts.”

Only a few ethnic media outlets are members of INN, but Cross said that the organization is working to recruit more ethnic media. Among the ethnic media members are: Alhambra Source, Borderzine, and Future Media.

Findings from the INN Index will also be presented and discussed at Stanford University on Oct. 5 at 10:00 a.m. An executive summary of the study can be read here. – By Karen Pennar