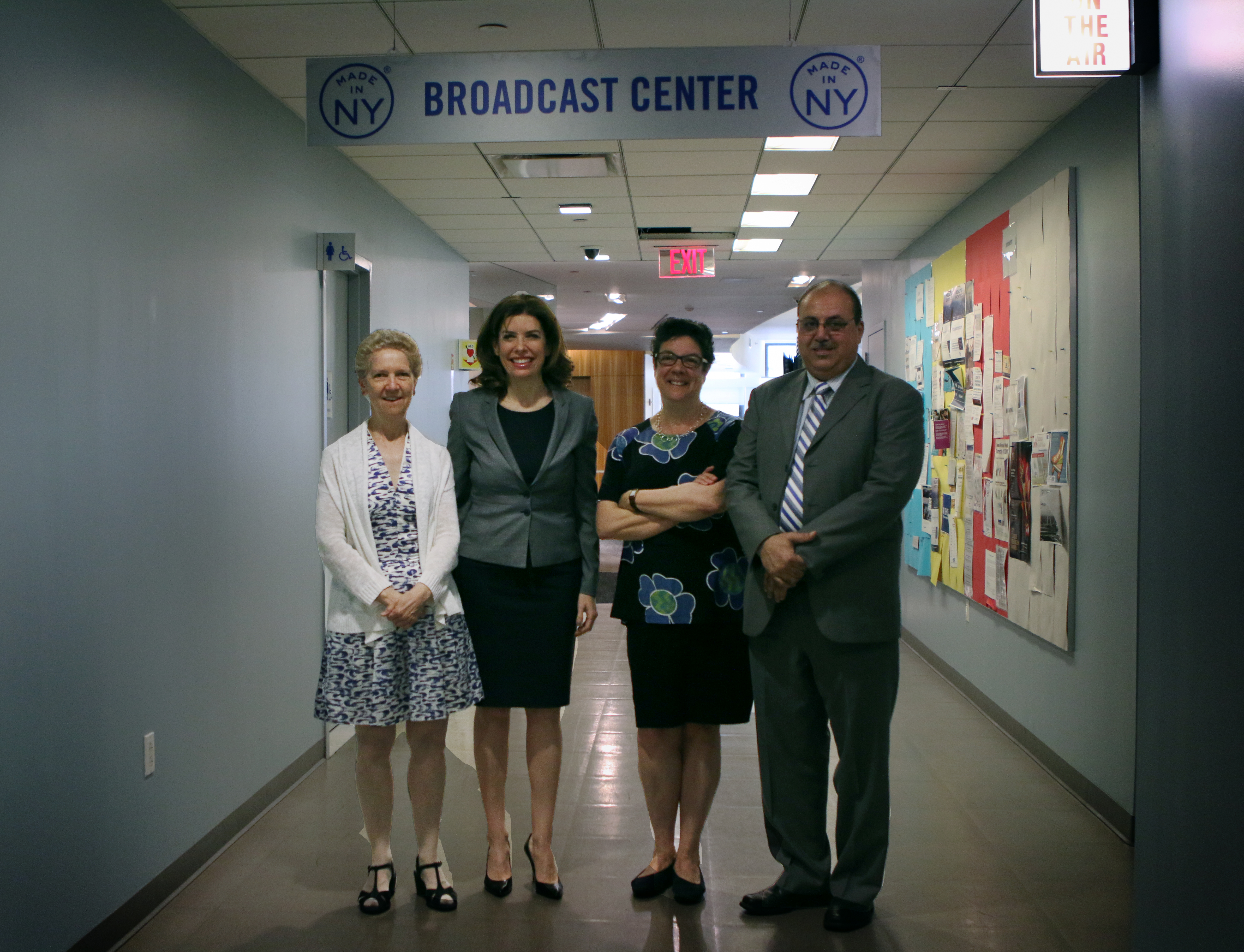 Mayor’s Office of Media and Entertainment (MOME) Commissioner Julie Menin and CUNY Graduate School of Journalism (J-School) Dean Sarah Bartlett today announced that MOME will grant $1 million to the J-School to create new programs to help New York City’s community and ethnic media outlets stay competitive in the current media landscape, and bring them further into the digital age, says a press release issued by the MOME. This funding will allow a major expansion of training opportunities for journalists working at these publications, which have an enormous readership and are of vital importance to communities around the city. In addition, the J-School’s broadcast facilities will be officially renamed the “Made in NY Broadcast Center” in recognition of MOME’s commitment to this important element of New York’s media sector.

“The diversity and breadth of New York City’s community and ethnic media reflects the diversity of our city as a whole, and it is crucially important to keep these outlets thriving,” said MOME Commissioner Julie Menin. “These publications add key perspective to our local news landscape, and they keep New Yorkers in the know – whether their native language is English or Bangla. We look forward to collaborating with the J-School on this important initiative, which builds on their history of providing excellent training for journalists at ethnic and community publications.”

“Since 2006, the CUNY Graduate School of Journalism has been dedicated to opening doors for a diversity of reporters and ensuring that everyone in the media industry has access to the new tools of the trade,” said CUNY J-School Dean Bartlett. “This partnership with the Mayor’s Office of Media and Entertainment, which ensures that the community and ethnic press throughout New York City will have many opportunities to benefit from professional training sessions, recognizes and builds on the CUNY J-School’s track record. We look forward to working together and feel assured of the many positive results in the community and ethnic media sector to come.”

New York City is the ethnic media capital of the world, with more than 350 community and ethnic outlets that produce news in dozens of languages for print, radio, television and the web. A significant portion of New Yorkers – one-third of whom are foreign-born – rely on these outlets as a key source of news and information. Combined circulation of daily and weekly community and ethnic publications reaches 4.5 million people – more than half of New York City’s population. The CUNY J-School launched the Center for Community and Ethnic Media (CCEM) in 2012 to address the need to support these news outlets in particular, and help them tackle the unique challenges they face.

Mayor de Blasio and Speaker Melissa Mark-Viverito announced an expansion of New York City’s outreach and engagement with community and ethnic media in January of this year, including the launch of an online directory of ethnic and community media for City employees to use in outreach and informational and paid campaign efforts, and a system to ensure accountability with the aim of having equitable communications across diverse ethnic, racial and geographic communities.

While New York’s community and ethnic outlets are a key element of the city’s media landscape, many of them are struggling to keep up with the quickly evolving world of tech-driven journalism. In addition, many of the news outlets that CCEM serves are under financial pressure. Their employees often wear multiple hats: reporter, publisher, editor, photographer, ad salesman, and social media director. These publications are stretched thin: they often cannot afford to devote resources to professional development, and few have been able to fully migrate to a digital environment.

Through this grant, MOME will provide CCEM with the means to create new, affordable courses building on the J-School’s current offerings in subjects such as social media, video storytelling, podcasting, and broadcasting techniques. It is estimated that MOME’s grant will allow the J-School to train between 200 and 300 journalists annually.

“I join my colleague and Co-director Karen Pennar in thanking Mayor de Blasio and Commissioner Julie Menin and the Mayor’s Office of Media and Entertainment for their very generous grant to support a new training initiative at the CUNY J-School’s Center for Community and Ethnic Media,” said J-School CCEM co-director Jehangir Khattak. “By helping this sector to adopt new technologies effectively, the Center’s training initiative will help community and ethnic media outlets improve the quality of their journalistic content, and support them in the important role they play in increasing the civic engagement of the diverse communities they serve.”

“Journalists in the ethnic press like myself have to deal with a lot of challenges in doing our reporting every day. CCEM has reached out to us and I’ve appreciated being able to have access to training workshops,” said Rong Xiaoqing, a reporter at Sing Tao Daily, which is a member of CCEM. “At Sing Tao Daily, we’re also having to do more and more on our own, not just write stories but also take photographs and keep up with the demand for content. So this program should help all of us with the digital training we’re going to need in the coming years to be competitive and to thrive.”

Potential courses supported by this grant include:

“Community and ethnic journalists serve a vital role in keeping diverse communities across New York City informed,” said Council Speaker Melissa Mark-Viverito. “MOME’s investment in these journalists and their publications will provide a great benefit for New Yorkers and allow community media to stay competitive in the 21st century. I thank the de Blasio Administration for their commitment to preserving and enhancing community journalism in our city.”

“I’m glad that the City is prioritizing digital training for journalists,” said Council Member James Vacca, Chair of the New York City Committee on Technology. “The media landscape is constantly evolving and journalists need to know the best methods to get information out to their audiences. Specifically, this grant will help New York City’s robust ethic media outlets modernize and utilize technology to reach a greater audience.”

“Kudos to MOME Commissioner Julie Menin and CUNY J-School Dean Sarah Bartlett for announcing this much-needed initiative that will support New York’s ethnic media outlets and reporters who are an informational lifeline for hundreds of thousands of immigrants,” said Steven Choi, executive director of the New York Immigration Coalition. “Without our city’s ethnic media, many of the City’s three million immigrants would be completely disconnected from news about what affects them. We must do as much as possible to ensure that resources are available to support these outlets so that they may thrive.”

“Journalism is the lifeblood of our democracy,” said Manhattan Borough President Gale A. Brewer. “This grant will enhance the already-great work being done at CUNY’s Journalism school and strengthen the crucial local media outlets that serve our communities.”

In addition to the professional training afforded by this grant, CUNY J-School’s broadcast facility will be renamed the “Made in NY Broadcast Center” in recognition of MOME’s support of the school. This broadcast center is composed of a high-definition TV studio and radio recording facility, all with cutting-edge equipment including DSLR cameras, video cameras and audio recorders. Training for community and ethnic media reporters at the “Made in NY Broadcast Center” will include use of camera, audio, video, and lighting.

About the Mayor’s Office of Media and Entertainment

The Mayor’s Office of Media and Entertainment (MOME) is comprised of two divisions. The Office of Film, Theatre and Broadcasting encompasses film, television, radio, theatre, music, advertising, publishing, digital content and real estate as it relates to the creation of creative content. It serves as a one-stop shop for the entertainment industry, which has seen explosive growth over the last year in New York City, contributing nearly $9 billion and over 130,000 jobs. The Office promotes New York City as a thriving center of creativity, issuing permits for productions filming on public property, and facilitating production throughout the five boroughs. The Agency also oversees NYC Media, the City’s official broadcast network and media production group, which has a reach of over 18 million people and provides programming for six local cable stations, including award-winning programs on the popular NYC Life (channel 25), as well as one radio station. You can also follow us on Twitter, Instagram and Facebook.

Established in 2006 under founding dean Stephen B. Shepard at a time when the industry was reinventing itself for the digital age, the CUNY J-School is at the forefront of equipping the next generation of journalists with the tools to find stories and tell them effectively — using print, broadcast, visual, interactive, and social media.

About the Center for Community and Ethnic Media:

The Center for Community and Ethnic Media, located at the CUNY Graduate School of Journalism, serves as a hub of research, training and professional support for community and ethnic publications in the New York City metropolitan region.

If you are a member of the Metro New York-based community and ethnic media and wish to receive CCEM’s announcements about events, trainings and Voices of NY’s daily news digest, you can sign up for our email alerts by clicking here.